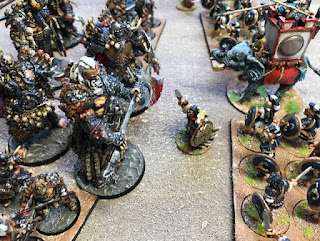 Another  play test of James Midguard rules, wanted to try my Elephants out and base the Armies on the lists provided. The straight up fight was between the Tyrants  Barbarian cannibals  A Celtic myth force against a Greek myth army For the Tyrants I used the Fomorian giant warriors stat line that fits perfectly, the Greeks added Three Elephants. I as always laid out randomly the forces with just three spear throws apart. 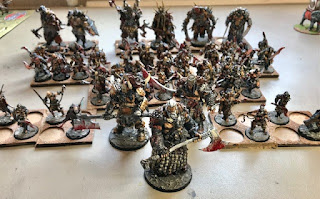 The Tyrants Army around 300 points  warriors , skirmishers and giant units, one king and two heroes. 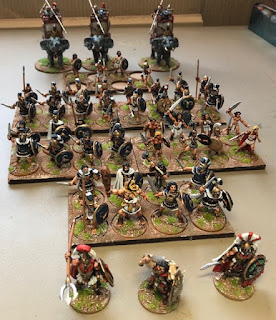 The  Greeks Hoplites units , one skirmish unit with Bows and three mighty Elephants 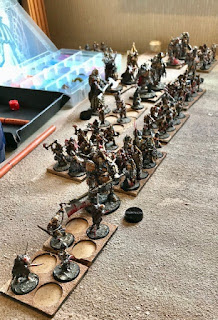 The Battle: the Tyrants army advanced slowly its deployment mainly in the center, the Greeks advanced to meet the Elephants on the flanks with the  Hoplites in the center, on the Right flank the Tyrants warriors clashed the hero with the unit challenge the Greek hero to single combat, to not loose face the Greek hero took him on, this proved to be fatal and the huge Fomorian cut down the brave Greek after three rounds, was this an omen?. On the left an Elephant smashed into the Tyrants warriors, smashing them apart and into the  huge warriors behind. in the middle the Greeks advanced and met the Tyrants warriors head on.
The Greeks started to force back the Tyrants men on the left the Advancing Tyrants warriors unit who slew the hero meet head on the king and a defending unit, again a challenge was offered the Tyrants hero was wounded and the king felt  at ease taking on the giant, this again proved to be a mistake the giant cut the king down in the second round then with his unit destroyed a unit of Hoplites. only a charging elephant managed to  out flank the Tyrants men, on the left the Elephant wiped out the  falling back warriors to meet the Giant Fomorians who took them head on.
The tyrant sensed he needed to act and joined the large  combat in the middle he wiped out the brave Greeks then  faced the  flanking elephant, as before the tyrant wiped the poor beast out, the Greeks had lost the reputation and  left the battle field.
A very close run battle but the Tyrants force is difficult to  stop, the elephants hit very hard but i learn they need back up. loosing the king and a hero made the Greeks suffer. great to use miniatures I have in boxes and as before the rules work, I believe I mastered the single combat rules and this did make a huge difference and added to the feel of the Battle. A real great feel to the game play and  i have  a large
Norman and  Pict/Irish/ Welsh force to work on. So more to come, be safe my friends. 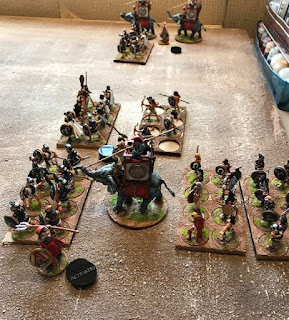 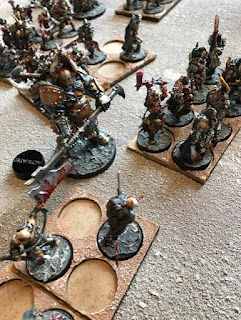 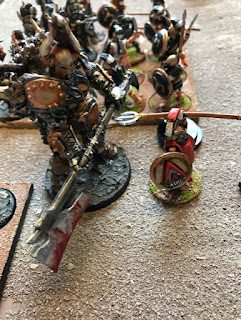 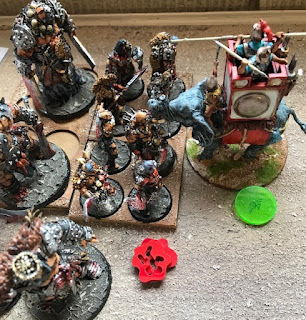 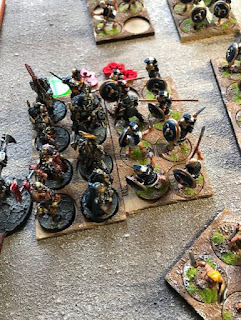 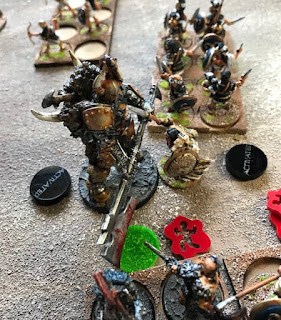 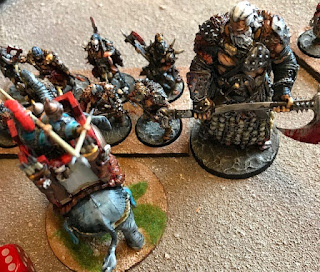 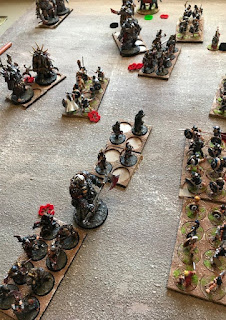 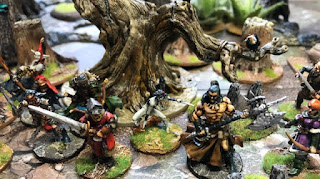 Had the  honor of play testing the Beta rules for a skirmish game called Verrotwood, composed by Michael Crutchett, A dark skirmish world of strangeness and horror, Cults  fight for the  place in the world encountering terrors and horrors as they hope to survive to reach the goals of there Dark lords.
The Beta gives the basic rules and 2  cults and a scenario to try out, played on a 3x3 table  in a wooded close confine  with many dangers  lurking and seeking there end. the  game was to get 6 objectives while trying to avoid a hateful ghost who would  scare the life out of you. each cult was of four characters of   simple stat lines, the combat using a D10 dice pool which  to me works great for the game play. Only 4 turns of furious action using a random activation system , I used blank playing cards with names and the ghost on then shuffled and drawn as the characters activated 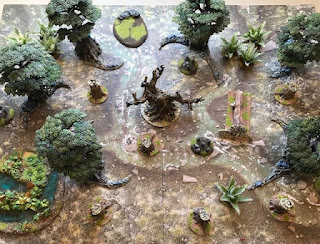 My play area smaller then 3x3 but looked great 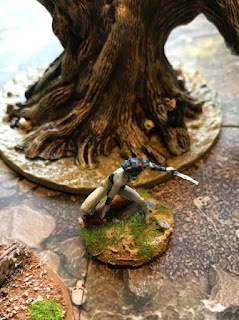 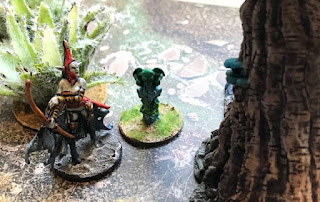 Turn 1 Vanya gets to and objective 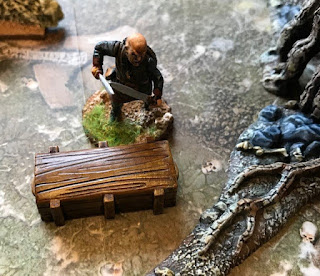 Carl reaches another one 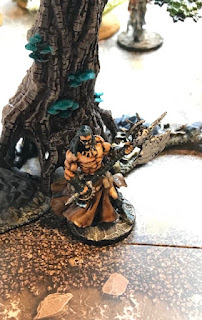 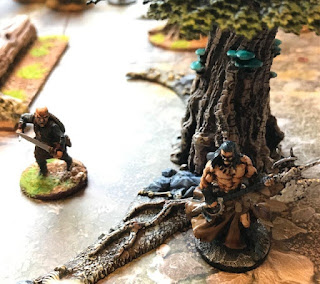 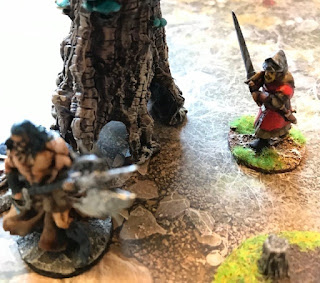 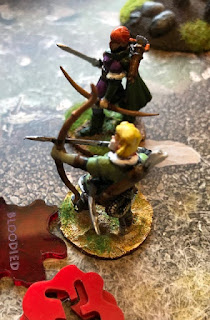 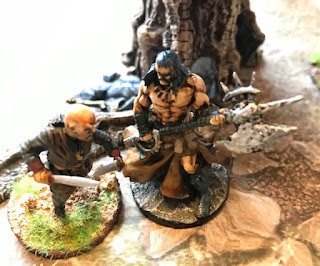 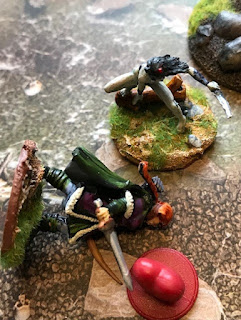 The Ghost charges and strikes down poor Red 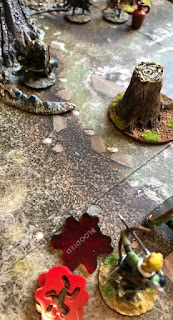 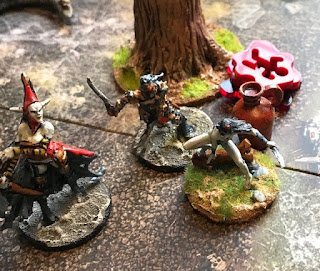 The Ghost tears into Psycolas mind 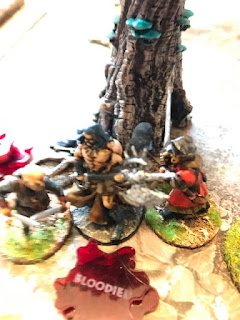 Sir Robin joins the fight  with Carl against Mo 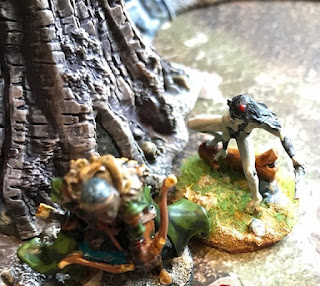 The Ghost attack Sam as he skirts the area 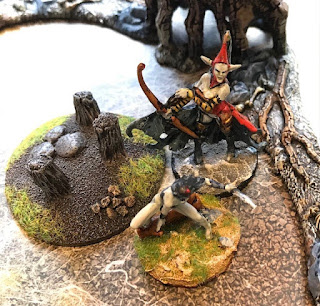 She then spots Vanya and  strikes 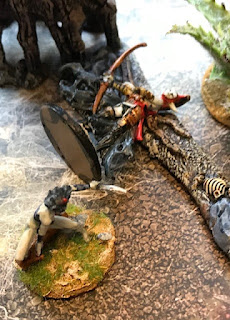 Slaying her as Psycola grabs another objective 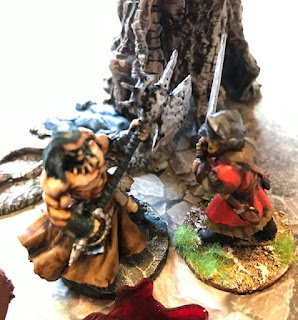 Mo kills Carl and then exchanges blows withe Sir Robin, as the 4 turn ends
Mo wins with 2 casualty s and 3 objectives taken for the loss of only Vanya.
Sir robin is left alone with only one objective taken, bad day for his Cult.
The game; for me its a great skirmish  game so far, the combat is fast and furious, the scenario plays well and the horrors make it a very fun scenario to play. I will play more  to help the play test. Good fun. be safe my friends.
Posted by shadowking at 07:26 1 comment: